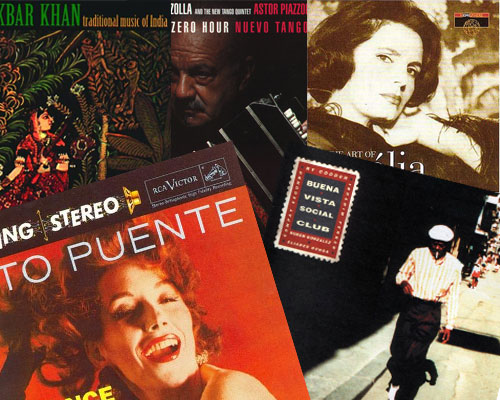 “World music” refers to local music from places where you don’t live. Specifically, in an American-centered musical world, it is music that has its local roots outside the mainstream. World music expresses the tradition of a country or region, and is usually related to that country’s sacred rituals, native dances, or politics. When listening to world music, you become aware of other people’s culture, you explore exotic sounds, and embark on a musical adventure. It is traveling by listening.

World music can take many forms – from ritual music to music influenced by pop, rock, hip-hop or electronica. You can start exploring world music by having a taste of the variety of sounds it offers. The following is a top list of accessible world music raved about by enthusiasts:

This is considered to be Argentinian tango master Astor Piazzolla’s single greatest album. Recorded with his legendary quartet in New York, it is recognized as a cornerstone world music album.

Guitarist Ry Cooder and producer Nick Gold brought veteran Cuban son musicians together in what was to become an international sensation album. The album is cited by critics as a rare blend of quietude and intensity, and although the players sound laid back, the music they create is very much alive.

This is the best-selling album of the timbales master- bandleader -composer, Tito Puente, also best known as the King of Mambo. He is known to the younger generation as the composer of the Santana classic “Oye Como Va”. In this album, he produces the best danceable synthesis of Afro-Cuban rhythms, jazz principles and the musical traditions of his ancestry. This album propelled Tito Puente to become the most famous name in all of Latin music.

This is the must-have Hindustani classical music or ragas. Khan is the Son of the legendary Ustad Allauddin Khan (whose pupils include Ravi Shankar). He plays the 25 string sarod with calming lightness and gentle melodies, although sometimes he attacks the instrument with thrashing strokes. The first raga in this album, the 17 minute Raga Chandranandan is his own creation.
.

Amalia Rodrigues is the most influential artist who popularized the fado worldwide. The fado is a Portuguese song genre characterized by mournful tunes and lyrics. Amalia’s voice is described by critic Elijah Wald as “rich and sinuous, with the soulful intensity of a Billie Holiday or Edith Piaf, but a warmth and sense of phrasing all her own.” This album contains her finest recordings from 1952-1970.

6. Between Heaven And Earth: Music Of The Jewish Mystics – The Andy Statman Quartet (Israel)

The Jewish music in this album differs from the typical klezmer happy tunes. According to critic Jason Verlinde, what you will hear in this album are “extended meditations on Hasidic themes and compositions that quite literally blossom before your very eyes, with shades of klezmer, bluegrass, and jazz all thrown together. The tunes may not come out swinging, but, filled with gorgeous reflections, a gentle pace, and haunting solos, they simmer to great results… The effect is moving and spiritual”

Celia’s driving vocals and bewitched enthusiasm inspires the musicians into a pitched frenzy resulting in some of the best playing ever put down on track by any assembled group of salsa artists.

Cheo Feliciano, considered one of the most powerful voices of salsa, was characterized by his excellence and his ability to interpret various musical styles. He joined the cast of Fania Records (specializing in Salsa music), where he was resoundingly successful with countless albums that took him around the world as a distinguished member of the ultra-famous Fania All Stars. This 1971 release remains one of the all-time most important Salsa recordings of the 1970s.

9. I Will Not Be Sad in This World – Djivan Gasparyan (Armenia)

Djivan Gasparyan, one of Armenia’s greatest musicians, is a virtuoso of the duduk, an ancient oboe-like instrument that is made of apricot wood and capable of sustaining drone notes for long periods of time.

Gasparyan here plays with an awareness that his listeners need to shake off their worldly burdens. He offers hypnotic, heavy hearted sounds that are great for contemplation.

10. Below the Bassline – Ernest Ranglin (Jamaica)

Earnest Ranglin was an influential figure in the beginnings and evolution of ska. “Below the Bassline” can be best described as a Jazz-Reggae crossover album. Ranglin provides us with a fresh insight into some well-seasoned Reggae classics, as well as throwing in a few self-composed originals. Ranglin’s guitar playing is inspired! This album is a brilliant example of Jamaican Jazz in it’s purest form.

The pioneer in the world of Tex-Mex and Tejano music brings together traditional sounding songs as well as country flavored guitar sounds with authentic Tejano accordion sounds.

The wonders of Napalese Tuvan throat singing is featured in this album. Tuvan throat-singing is a singer’s ability to sing two notes at once, a low drone and a higher melody from the overtones of the low note. This is some of the most beautifully eerie yet enchanting rustic music ever recorded.

This is quite possibly the most beautiful and influential West African record ever released internationally, according to reviewer Richard Gehr,. With a phalanx of electric guitars that functions like a percussion section, and talking drums that sound like a gossipy Greek chorus, Nigerian juju star King Sunny Ade and His African Beats, all 20 of them, proved that African music could be as complex, dramatic, and symphonic as any European ensemble.

The Japanese percussion ensemble Kodo presents an amazing live performance. The rhythmic energy and the joyous Japanese sounds reverberate beyond the Acropolis walls!

This is the first and the most famous of a series of electrified traditional music from Congo. Konono #1 makes hypnotic, beautiful, heavily rhythmic dance music with an often heavily-distorted electric thumb piano as the lead instrument.

Yemini Jewish songs played with synthesizers, drum machines, and dance beats becomes a seminal ethno-techno hit. “While its contemporary sound might make it sound shallow, there really is a lot of depth here, the lyrics coming from the 16th century rabbi Shalom Shabazi”, according to reviewer Chris Nickson.

The band mixed various strains of Latin music with different African music styles to create uniformly stunning results not all that different from Afro-Cuban music. The French vocals are lovely, and the powerful mix of African and Latin percussion is undeniable–but keep a particular ear out for guitarist Barthelemy Attisso, whose tasteful leads float over the top, according to reviewer Tad Hendrickson

Pretalus presents Bastos’s journey through a series of prayerlike meditations. They combine the guitar patterns of African pop and the sentimentality of fado, Portugal’s version of the blues, since Bastos defected to Portugal from his native strife-torn Angola.

20. Immigrés – Youssou N’Dour (Senegal)
In addition to the gorgeous title track and N’Dour’s prayer for (and plea to) his Senegalese countrymen abroad, there’s plenty of arresting mbalax rhythms here, marvelously danceable with the tama drum working across the juddering beat, according to reviewer Chris Nickson